Today’s book review is about this collection of vegan recipes from Attila Hildmann:

I like the style of this book, the gorgeous pictures, the simplicity of the recipes and of the layout. You can see a preview of the book yourself. Vegan to go is currently only available in German, while two other books from him are translated to English (Vegan for fit and Vegan for fun) – I hope this one gets translated soon, because it has so many useful ideas for lunches and picnics! He also gives a ton of tips about how to optimise cooking (cook a larger amont and use it in other recipes, reuse leftovers, cook several side dishes and combine them in a tasty, varied lunchbox…)

Attila explains the basic principles of veganism in the introduction. I liked how he didn’t try to mass-convert the readers, or worse, to make non-vegans feel guilty about eating meat and dairy, and use that as a moral crowbar. He is great in telling his story and sharing his thoughts about his way of eating. I liked how he shows how vegan recipes don’t have to be boring or ascetic or the normal-recipe-without-meat, and that many recipes in Mediterranean cuisines are already vegan. I also liked how he talks about his hobbies on Facebook: fast cars, sports, vegan recipes… he doesn’t fit the description of the usual vegan, but then I got a revelation: does he have to in order to be considered a proper vegan? Shall we expect that all vegans have everything else in common? I think that he is building a bridge towards all people who are not interested in how vegans dress, have fun, shop and so on, and therefore assume are not interested in how they eat; he shows that eating vegan doesn’t involve the rest of your life, if you don’t make explicit, separate decisions to do so.

Thanks, Attila, for being a great ambassador, for your recipes and your positive vibe!

I bought silken tofu out of curiosity and was unsure how to prepare it. This recipe, from the German producer Taifun, sounded promising and simple, so I picked it and prepared small mousse jars:

I used lemon instead of lime, and whipped the soy cream without stabiliser (if you don’t have it, use a small quantity of starch instead), and it tasted great. This jar is the last one of the six I made, and after a few days it was still firm and light.

I topped it with wild cherries in syrup (Amarene Fabbri):

For a friends’ party I challenged myself with a new biscuit recipe. It was risky for two reasons, first because it was a recipe untested by me, second because I am not so good at biscuit baking.

Nevertheless, full of optimism, I baked a batch of coconut biscuits following this recipe from La Tendresse en Cuisine [in French] and this is how they came out: 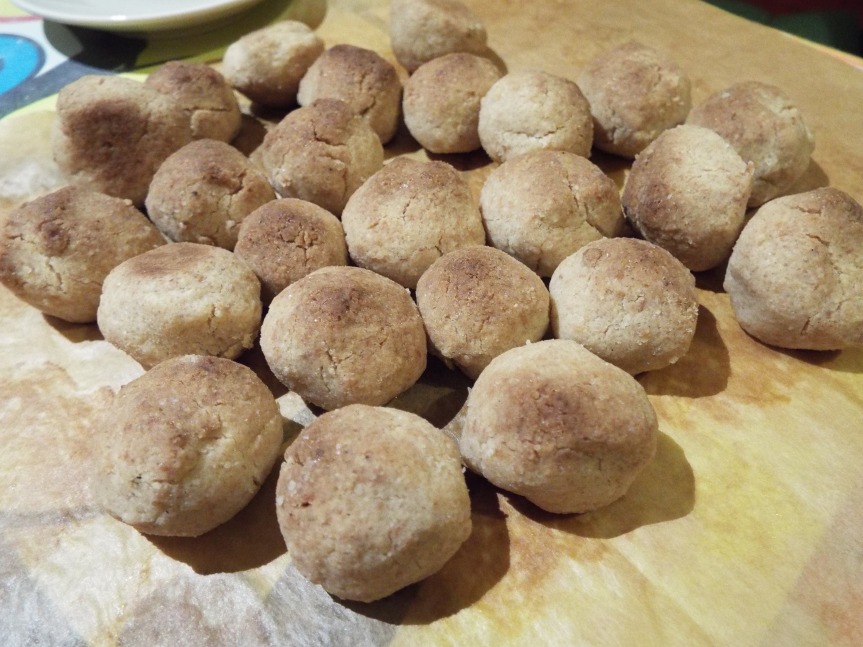 They look nice and crumbly but they were way too dry. I believe that my difficulties come from my inability to understand if the intermediate steps are correctly done. Actually, the pâte sablée had a wonderfully crumbly texture. I wonder what I did wrong, or at least, not well enough.

Anyway, they are all gone! Let’s see how I do next 🙂

I’d like to share a recipe of a super simple chocolate cake I made recently. I was back from a 20-day trip abroad and I had not yet gone shopping, but this recipe asks for so few ingredients, none of them perishable, so I was able to bake this amazingly tasty and fluffy cake on the fly:

I have no other pictures, as it disappeared too fast!

Ingredients (for one cake or 12 muffins):

Mix flour and sugar in a bowl. Add the cocoa powder or the chocolate, previously melted with some butter or milk. Add milk, baking soda and spices. Mix well. Pour the mixture in a cake pan and bake for around half an hour at 180 degrees Celsius.

I was used to bake this kind of cakes with eggs, so this eggless recipe left me initially cold. After it came out of the oven and we tasted it, I changed my mind, the texture was perfect!