As usual, I picked this book from my meighborhood’s public library and I have read it in a couple days. I sank in the fluent French prose like in a calm lake, and I let myself be carried slowly around. It’s the story of several people in French countryside, I felt the cautious approach of the newcomers, the many wordless statements and the silences among the characters. There was no obvious outcome and not even a clear progress, no heroes, no leaders, no big programs. Things happen, thoughts get deep and feelings transform with time. Little things matter. Nature, animals and weather dictate how and when people can move and work, merciless but full of force and life.

I don’t think I can say more, this is my heartfelt recommendation 🙂 I’ll be looking for more books by Marie-Hélène Lafon and will definitely review them, stay tuned!

This one is a different kind of book recommendation:

It is awkward for me to write about this strongly political book, because I know very little about the French political scene, and having a vague opinion sounds lame and irresponsible. However, I picked this book with the intention to know more about Macron’s views and his perception of France’s political-social-economical current affairs.

As I expected, this book is meant as a manifesto and as a presentation of Macron’s political persona. There is not much about him, not much about controversial ideas, no debate of course – a series of chapters with his statements about various important topics. Of course if I wanted to hear opinions about him and his actions, I know I have to look elsewhere: books about him written by others, comments from journalists and people with enough experience in the topic under debate, opposition, locals… and consider all these information as pieces of a larger puzzle.

I have to say that I liked the simple, accessible style of the book. I wasn’t moved much, because I know that the book is intentionally written like this, to be readable by virtually everyone. I didn’t feel the urge to agree with him or to support his causes, I don’t know if it was expected or not. I just kept reading, not too fast, and consider his points critically (not knowing the background information for most of the topics forced me to take his word as is, but I know I can make my own research to double-check). I think he packed a lot of statements in such a short text, and it is probably a good overview of his political agenda.

What I would have done differently is reading the book even slower and fact-check everything, but I hadn’t at the moment that much interest. But at least I know something more about him than before.

Yesterday I finished reading “D’autres vies que la mienne” and took a moment to let the feelings sink. It was a moving book, that I read page by page as if I were listening to someone, letting their words decide the speed of narration. Carrère talks about the stories of members of his close family and of dear friends, as he wanted to portrait “other lives but his” in a direct and simple style. While reading, I felt taken very close to the people in the book, as if they were old friends. Carrère has a way of describing facts and perceptions that made me feel respectful while learning of very personal, often tragic, life events.

When I talked about the book to a friend, I realised that my feelings while reading looked much like the ones I had when reading “Kobane calling”, a comic book about Zerocalcare’s non-reportages in Rojava. Despite the apparent lightness of the chosen medium, the stories of the people he meets are portrayed as life-like as possible, hard and uncertain.

I felt that both authors opened me a direct connection to other people, in a way that these very people were the centre of attention – not the authors, nor me the reader. It would have been easy to bend these lives to make them more cinema-like, more appealing to my reader’s eyes; or to let the author show off their drawing/writing skills, or even to make use of the facts to squeeze out some general morals; I felt none of that. Both authors wanted to mention that their point of view was unescapably partial, and that they were humans as much as the people they portray in their narrations. I felt, together with them, the most sincere respect and admiration for people who bravely and modestly deal with the difficulties of their lives.

An absolute classic, about which I am a bit intimidated to write. But I am moved by how close I felt to the people and events related in the book. I read it in French and I found the language and form very pleasant, elegantly aged. I wonder how it feels to read it in the original version, and in the many translations.

I remember the impact with the first pages of the book. Even more than with Barkskins, I started at my standard reading speed (a reading trot!), but, as soon as Hans Castorp arrives at the sanatorium, the rhythm of the narration slows down so abruptly that I felt like falling in a metre of soft snow. I was stuck for a couple paragraphs, then found out how to wade forward by reading much slower, paying attention to every word, stopping sometimes to think about a line.

It has been a deeply fascinating read. I felt a lot of affinity with Hans Castorp’s thoughts and discussions about the world and the meaning of life, and I suppose this is because I am, like him, currently sitting away from the world’s continuous, sometimes frenetic, activities. I sympathise with his unheroic stance, his trembling look up to the higher truths that stand white and tall like sublime but also dangerous mountain peaks. This novel is an incredibly detailed soul journey. I hope that my heartfelt review will encourage you to give a look at this book 🙂 – and as usual, let me know your impressions in the comments!

I read Dieser Mensch war ich (this person was me) many years after Memoirs of Hadrian,  but I wish to review them together, as they share common themes, and have woken similar emotions in me during reading.

Marguerite Yourcenar wrote a first-person novel about the life of emperor Hadrian, examining various events of his long life with the wisdom of his last moments. I felt that Hadrian showed an uncommon serenity towards the end of his life. Christiane zu Salm collected one- or two-page summaries of hospice patients in her care (she is Sterbebeglieiterin – assisting people approaching death), who agreed to be published in her book. These people are much closer to us than Hadrian: they were mechanics, shopkeepers, teachers, unemployed, with children, with complicated families, married, alone, sad, ready, desperate; it is easier to relate to their words and their feelings, because we share common experiences. Still, I see that the approach of the end of their lives made them all (Hadrian included) think of the same questions, and made them all simply human. I appreciated the somber, elegant lyrism of Hadrian’s long monologue, but I didn’t feel that zu Salm’s patients were less interesting or important because they used ordinary words. Presentation in this case is not relevant to me, and I hope I’m not alone thinking that.

I wish to end with the thought that these are stories of people’s lives. Death is of course very present in both books, but as a future event, as the end, rather than a fact in itself. I felt that their message was to appreciate every moment of life, and they made me think about what makes my life meaningful right now.

I want to dedicate a post to a few French books I found in the libraries in my corner of Berlin, as I have been able to find both books that I knew already, and to discover books at random, and being very happy with it. Thanks to the librarians who have picked up such a valid array of books from an immense pool, to populate the handful of shelves dedicated to foreign language literature!

Didier Daenickx’s L’espoir en contrebande, a series of black novels which won the Prix Goncourt in 2012. I loved the atmosphere, not so much the plots (spoiler: murders!): 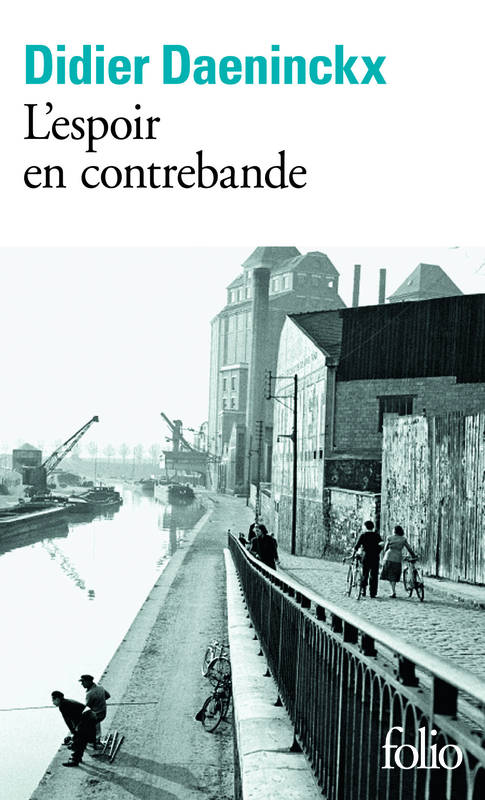 Erik Orsenna’s La chanson de Charles Quint – I had read his novel Madame Bâ a few years ago, and I found his emotional, philosophical and almost myth-like prose again:

And last, Marie Sabine Roger’s La tête en friche – the story of a young man who discovers, step by step, a way of thinking that he thought unattainable and even unuseful. I like her tact in letting the protagonist explore friendship and affections under a new light, with his words, and with all serenity he is capable of.

Stay tuned for more book reviews, and feel free to send me your suggestions!

I read this comic yesterday at the library, in its German translation.

I have been moved by the story of this father and his family, who discover that their newborn baby has Down syndrome. Fabien Toulmé includes the hard moments as well as the happy ones, his doubts, his difficulty in accepting his daughter, the various degrees of help he receives from doctors, colleagues, family and friends. He doesn’t hide that it took him weeks to take his daughter in his arms. He tells how his wife and older daughter reacted, and how they all took care of the newborn baby.

I found that this story portraits ordinary people, not heroes, facing difficulty, and overcoming it with their own forces and with the medical support available to them. I have thought myself what would happen if I become the mother of a special child, and I felt so unprepared. I wonder how many people feel this too. I am glad that Fabien shared their journey so honestly, and especially happy that he did it in a comic: emotions and feelings pop out of the pages more strongly than printed text would do. I recommend this book to everyone, not only future parents: knowing a bit better what journey it is to raise a special child would hopefully increase empathy and support.