As I learned German very late, I missed the opportunity to absorb culture together with language, as I would have done in kindergarten and in school and in everyday life, were I born in a German-speaking place. I notice this gap when I write in cursive, when I sing children’s songs, when I use proverbs and figures of speech – they all come from Italian culture. I’m trying to bridge this gap by reading childrens’ books in my local libraries, and it’s always fascinating. Especially history books that -of course- center on another country. In my mind, history is so deeply connected with the history of my country that I first have to find connections with my own knowledge in order to properly place the events of German history on the time-line.

That’s why I think I can profit from childrens’ books and in general from books-that-explain-things rather than just a dictionary. With only word-to-word translations I would not get the culture inputs that I need to feel more integrated here. On the other hand, some books take their time to explain concepts that I know already, and don’t require that much attention from me. This is in converse the most concentrated and captivating collection of culture insights I picked so far:

It’s a collection of German idioms, described in their meaning and origin in a short paragraph. Many expressions come from the past, and cite knights, ancient arts and crafts, farming, commerce, construction, old administrative structures. I liked how it gave me another angle of the German culture, not directly like in an history museum or book, but indirectly through many bits and pieces that survived in today’s language. My favourite is “Alles in Butter!” which means “All is OK/safe!”, and comes from the times where merchants transported fine glass manufacts from Italy to Germany, across the Alps on carriages. The risk of breaking would have been very high, if the merchants did not submerge the glasses in liquid butter, then let it become solid and protect the fragile objects from any shock. At destination, the butter was melted again and the glasses taken out and cleaned. Clever and effective!

Last weekend we have been visiting a friend in Amsterdam. It was my first visit to the city and in fact to the Netherlands, and it was a pleasant and interesting stay.

I’ve been surprised by how many buildings in the city centre lost their alignment, due to the instability of the soil underneath. I find amazing how the houses stay habitable and still look pretty and well-kept.

The weather was hot and dry, as in many places in Europe and around the world, and the vegetation was suffering a lot. The contrast with the greenhouses and gardens of the Hortus Botanicus was striking.

I even found time to sketch a bit, and chose three different windows from the houses around the square where we were stopping for a drink.

I’d like to come back to visit more landmarks and get a better picture of everyday life. If any of you have been to Amsterdam and surroundings and wish to share impressions and tips, I’d be very grateful!

A few days ago I challenged myself to draw horses’ ears. I have been drawing horses for as long as I can remember, but with a moderate and varied amount of attention to detail. Therefore I am able to draw horses’ ears somewhat by memory, so that they don’t look that convincing. Thanks to a library book with a lot of pictures (I prefer to copy from printed images instead of from a screen) I found plenty of portraits from which I could draw. Here is the result: 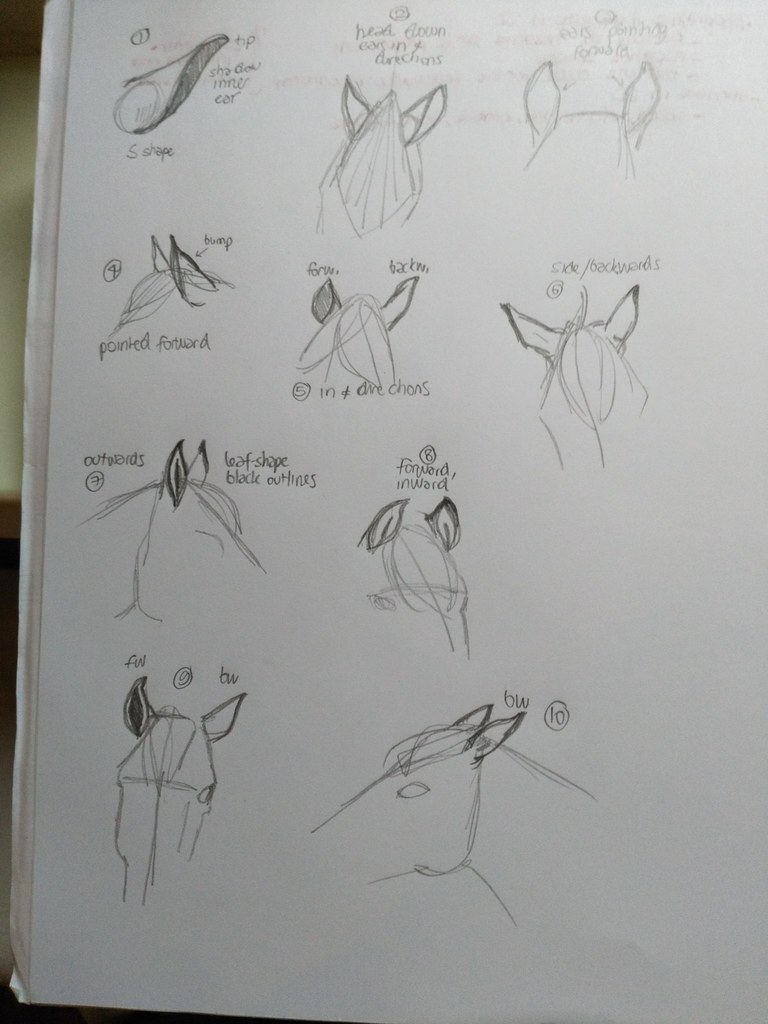 As usual, the first two sketches are a warm-up. From the third onwards I tried to notice something characteristic from each sketch, and for the forward-facing ears of sketch #3, it’s the angle in the inner ear side (I used to draw round ears by default – some horses have a less pronounced angle, but it’s always there). The same angle is visible when the ear is turned backwards: in sketch #6 I drew the ear as a trapezoid|trapezium, instead of a triangle. It felt strange to draw the ears like that, but in the end they look more realistic. The following sketches are more about ear positions and differences among breeds and individuals.

My next focus will be on hooves/feet, stay tuned for next post!

A few days ago I read Regardez Moi, an intriguing post from TeresaA about a horse clinic she attended. She reports how Nikki, the clinician, explained how she doesn’t use the term “respect” anymore when it comes to horses, in favour of “regard”. The latter term involves more the tuning of the horse’s attention to the person (and vice versa), rather than recognising some form of authority or leadership, or demanding compliance – “regard” can be seen as a communication agreement, before anything else can happen.

My own understanding of what she describes in the post is summarised in this schema, where an individual is surrounded by a circle, that includes and protects the individual’s personal space, time, resources and choices. Outside of it there is the external world, where many things happen, from which some of them try to reach the individual. The inputs are accepted when they pass through the circle’s doors:

Stimuli, inputs and requests from the outer world bounce off the circle walls, or come to the doors of an individual’s space and try to enter. The individual can use various strategies:

“Regard” seems to me the label for “accepting inputs”, “be ready for communication”, “keep doors ready to be opened”. I find that this term applies well to the middle situation of the previous list, where the individual feels able to accept and process inputs, and is therefore willing to listen. Denying this regard means ignoring, refusing the communication right away, being focused on something else, being unreachable.

I wondered what can make one unwilling to accept inputs, for example because of fear or habit, and I found that the initial model was too simple. It doesn’t deal with what happens after the input has passed the doors. I have extended it and added a second circle inside:

The inputs can now pass a first door, get into a middle space that is managed by the individual, but that is not the core space, so it’s more like a waiting area. The individual decides then which of these inputs can pass the doors to the inner core, the truly personal space. From the outside perspective, the inputs passed the visible doors, so they have been accepted by the individual, and they are confident they will get some dedicated attention and feedback.

I am aware that this involves the maintenance of two attention gates, and it seems easier to use only one: that is, ignore everything (keep doors locked) until it’s the right moment to pay full attention to them. It is very safe, especially if one is not so good at managing the doors, so that everything that passes the first door is likely to run free in the inner space and feast on precious personal resources. But what would a single gate mean for the external world? That it  would need to repeat its requests until the “attention lottery” grants the prize – which can be never. The external inputs/requests have only a vague idea of how to increase their chances of being heard, because it all happens inside oneself, and the data they get are “no answer at all” or “full answer”, with no apparent pattern. It means that they will multiply their attempts and make the pressure even worse. (Job applications anyone? People or companies who don’t answer to mails or the phone?)

I find that both schemes rely on the ability to say no to inputs. The “no” in the schema is represented by an input going inside through the door, then back outside. If saying no is not possible, the only way to limit the input overflow is not to let them in at all, no matter how urgent they think they are. The two-circles scheme makes it possible to say: “I have noticed this input from outside. I have given some attention to it and I’m deciding what to do” while the input is not yet in the inner personal space. Then one can say either yes (and the input comes through the second set of doors) or no (and the input leaves the waiting area and comes back outside).

The two-gate model allows external inputs to get an answer quite fast, that is either a no, a yes-now, or a yes-in-the-future. I would like to work in that direction, because I feel that (at least some) external requests need an answer soon, at least a short one, out of politeness and regard. Some close friends provide me this kind of feedback, and I feel at ease with them, because I know I don’t have to ask more than once, and they are confident they can say no anytime. There this a sort of elastic connection and mutual consideration that I cherish a lot.

Enough for today… I’m still reflecting on this topic and will likely write more about it, thanks for reading so far!

Yesterday I went for a walk around lake Müggelsee in the south-east corner of Berlin. It was a wonderfully sunny day and I snapped a few pictures:

The highlight was the ferry trip, for all passengers 🙂 The walk around the lake was nice thanks to the tall trees which provided shade, even if they were also masking the view. It was a long walk, but also refreshing and very quiet. I plan to go to Müggelsee again and maybe rent a kayak to paddle around 🙂 Will keep you posted for sure!

As usual, I picked this book from my meighborhood’s public library and I have read it in a couple days. I sank in the fluent French prose like in a calm lake, and I let myself be carried slowly around. It’s the story of several people in French countryside, I felt the cautious approach of the newcomers, the many wordless statements and the silences among the characters. There was no obvious outcome and not even a clear progress, no heroes, no leaders, no big programs. Things happen, thoughts get deep and feelings transform with time. Little things matter. Nature, animals and weather dictate how and when people can move and work, merciless but full of force and life.

I don’t think I can say more, this is my heartfelt recommendation 🙂 I’ll be looking for more books by Marie-Hélène Lafon and will definitely review them, stay tuned!