Some time ago I visited the Museum for Communication in Berlin, for the first time in many years that I live here. It was a pleasant experience: I was kept interested by the various ways in which the content was presented, the interactivity of the exhibition (especially in the first floor, with quizzes, robots, and various other funny art-like devices). I was not the only one having fun: there were two groups of children, who ran across the museum in detective suits, looking for specific items and solving riddles, following a tour designed by the museum. As children learn and remember by doing, I find that this kind of tour was a terrific idea to let them have fun and be active during the exploration of the museum.

There was definitely a lot to see! I was especially fascinated by the ceramic insulators display, and the lovely set of historical and iconic post-horns. Among the postal carriages there was an old Italian model from late 1800s that had “Impostazioni” written on the side – in modern Italian, “impostazioni” means “settings”, especially in the IT domain; at that time, it meant “items transmitted per post”. Funny and interesting find!

Outside the museum there are traffic lights, whose poles are completely covered by stickers. A closer look allows to recognise the museum stickers, which work as a ticket, and that one wears during the museum visit. Apparently, visitors who just exited the museum have taken the habit of peeling off the sticker and transferring it to the nearest pole. The whole looks both shabby and artistic:

That’s a museum I surely will recommend to friends who visit Berlin, and to anyone who hasn’t visited it yet 🙂

As a follow-up of my post about food blogs I follow, today I wish to share with you the (much shorter…) list of scientific blogs in my feed reader. The first scientific blog I found is Simply Statistics, that I started reading when I was programming with R. I like the authors’ approach to complex problems, that take into consideration much more than the simple statistic/computing task at hand.

Math with Bad Drawings is my second favourite: it’s a blog with, well, math explained with comics. Drawings and puns can be a faster way to good understanding of an abstract mathematical concept, and for sure it’s funny! I recommend it to people who feel scared by maths but are curious, and to kids of course.

For my weekly moment of astronomy wow, I have chosen ESA’s Picture of the Week, by space telescope Hubble. On spacetelescope.org you can find this feed and a lot more pictures and information about outer space, planets, galaxies… have a look for yourself!

One that I don’t follow anymore, but is definitely fascinating and amusingly accurate, is What If? from xkcd’s author Randall Munroe.

Do you follow scientific blogs? Do you have some to recommend? Let me know in the comments 🙂

Last week I accompanied a friend to their class of Chinese for beginners, and I decided to draw something while listening to them. On Wikipedia I looked for Chinese art, and stumbled upon A Ge, a contemporary Chinese artist (Wikipedia page, homepage). I picked this print of a child holding a dove, with a few more doves around on the ground, and took nearly one hour to draw half of it. I finished it during the second lesson I attended, and this is the result: 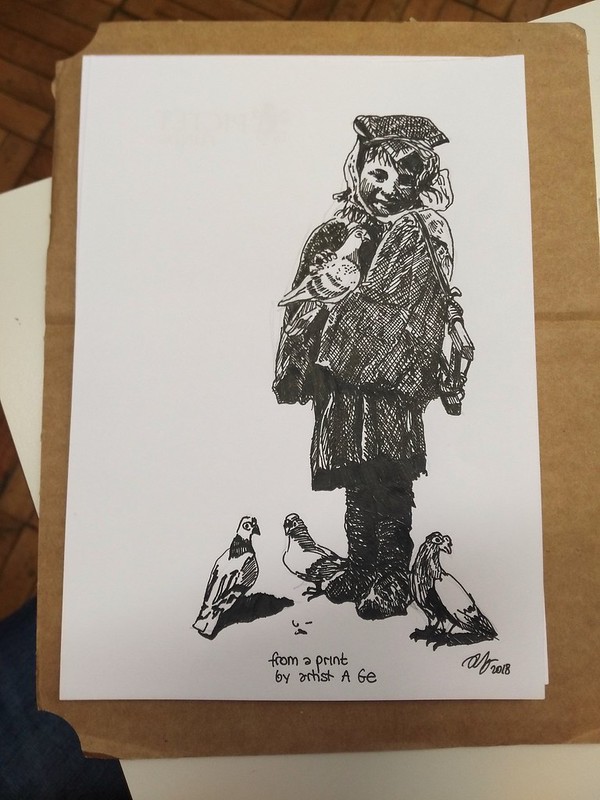 I like it, even if the pen I used was rather large, and many details were lost in copying. I took half of the total time to sketch the proportions with a pencil, and I am satisfied with the result 🙂 It is true that when I switched to the black pen, my focus was on details, so I had to rely blindly on the pencil lines.

Any comments on how to experiment further? I’d love to hear from you!

Today I watched John Muir Law’s workshop about gesture sketching, that focused on the preparation phase of a drawing: getting proportions right, identifying useful reference lines, blocking shapes, all before diving into details. It put together a lot of tips and gave many occasions to test these by copying from pictures. It is quite useful to learn to put the sketch together rather quickly, for the cases when the subject is an animal that moves fast.

Here is the sheet of paper that I filled while watching the video (notes both in English and Italian, as the video was in English but I write faster in Italian!):

Sunday, February 4th, was the second day of FOSDEM and the day dedicated to the Geospatial devroom. Back from the times when I was active in OSGeo, I co-organised a developer room focused on mapping technology, that hosted presentations for the whole day.

This year we had 15 talks about a broad variety of topics:

If you are interested in these talks, you can watch the video recordings and browse the slides used during the presentation. They are available in the pages linked to the table above.

As promised, here is my post about the talks I managed to attend at FOSDEM this year. I must say that I was interested in only two talks when I went through the schedule, and both were part of the Community devroom. It was sort of expected for me, as I am currently not active in software development. But when I entered the Community devroom (after a long queue!) I decided to stay for a few more talks, that proved interesting and thought-provoking.

The first talk I followed was “What community can learn from marketing”, by Matthew Revell. My take home message is manyfold:

Then it was the turn of “You’ve Got Some Explaining to Do! So Use An FAQ!” by Simon Phipps and Rich Sands. It was great to listen to them unwind the topic together, with ease and humour! Here are the messages I brought home:

I moved to the large La Fontaine room for “Python 3: 10 years later” by Victor Stinner. I’m ashamed to say that I never learned Python 3 properly, and I was so surprised to read that this version is around since so long. The release strategy was not really made to push for the new major version, so a lot of production code has not been migrated. Given the growing amount of user-provided packages, and the multiple options for distributing a Python app, the actual drop of Python 2.x doesn’t look imminent, but hopefully will be done more easily than before.

Overall, I got the impression that more speakers than last time were mentioning empathy, and more in general the importance of positive human interactions in the softtware development environment. I think it helps including more people, first of all the users, in the discussions, especially in this time where software users are the majority of the population, and therefore represent a wide variety of personalities and backgrounds. I am hopeful for the future of FOSS, in any form it will take, if it will be considered part of human culture as a whole.

Yesterday I wanted to draw, after a week of total break. I walked around the house in search for an interesting subject and decided to draw a part of a kitchen chair, that had a nice combination of lights and shades.

I tried to remember the explanations and tips given by John Muir Laws in his workshop about colour and value, namely nailing the value of a given part of the drawing rather than focusing on colour. I translate it as getting the shades right, by guessing the black component of the colour of that area. I’m not sure if this is technically correct, but it is a good approximation. Another source for a cool explanation of value, hue and contrast is this colourful post from Tin Can Knits.

I’m quite satisfied with the light areas of the top of the chair and the contrast with the dark background, while I think that the rest of the drawing is not as realistic. My drawing is more the effect of starting the shading from the top of the drawing and progressing one patch at a time. This has the risk of drifting values, especially in a large drawing. I think I can do better by doing a longer observation phase before starting any shading, so that I will keep track of areas with the same value. Another help can come from a black and white preview made with a phone/camera.