Last week I traveled to Rome with a small group of friends. It was my first time in Rome and I was very curious. I was a bit afraid of finding too many tourists and too many cars, but it was actually not so crowded (except for a few monuments). We had a pleasant week walking around, admiring Rome’s historical heritage, and not last, eating delicious food 🙂

As we arrived to our apartment, we were greeted by the calls and low flybys of many parakeets, which settled since years in the nearby park, as well as in several green areas of Rome. My friends didn’t care much about the birds, but I did, as my way of getting familiar with a new place by inspecting its plants and animals.

I didn’t make pictures at the famous locations, because I preferred to give my attention to the place than to my camera. There are plenty of good pictures of Rome’s landmarks already 🙂

I noticed the forest of old-style TV antennas on roofs and took several pictures of them. I later realised they reminded me of the cover of Calvino’s “Le città invisibili” – a book that I love and keep re-reading. 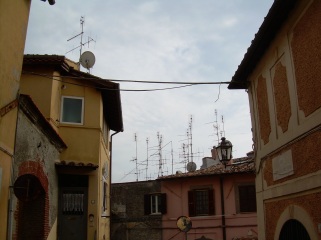 I was unhappy with the visit to the Cappella Sistina, because there was a thick crowd and it was noisy. I am glad to have had access to it, and I guess that it would be hard to limit the number of people inside without creating endless queues outside. I wonder if there is any time when the Cappella Sistina is not as crowded as that.

We left Rome with a lot of places still to see (not surprising!) and we plan to come back maybe in spring, when the weather is already warm, but the vegetation is greener and flowers abound. I already look forward for this second trip!