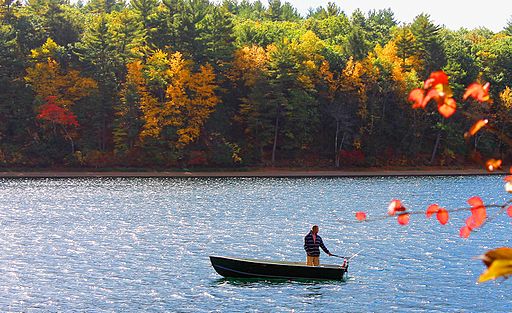 Walden is a such a famous book, whose reviews and analyses sum up to many times the length of the manuscript itself. My review is mostly about the waves it generated on the lake of my mind. I finished reading the book a couple weeks ago, and initially felt sorry not to have read it before; but I am glad I had read it now, because I enjoyed many more aspects, that the younger me would not have taken into consideration.

Thoreau narrates two years of his life in the woods near Walden Pond, in Massachussets, in 1845. He built a minimalist cabin with his own hands (with an accurate description of the process, and a precise account of costs and time), practiced a little agriculture, fished and hunted, interacted with the few people who lived or worked there. He recalls many moments of contemplation of the surrounding nature, that he describes in his lyrical prose, that sounds now maybe oldish and pompous, but immensely reverent.

His survival experiment is both simple and extreme. Simple in its practical steps, extreme in the meaning it can convey to the society as a whole. He returned to civilisation after two years, not because the life in the woods ended up as a failure or a delusion, but because he realised that he had learned the lessons he needed. Through his experience, I feel more easy on my own decisions, especially the ones that sound drastic, because they show a true need for changement, even if for a given time of my life, and as such should be heard and handled.

I left the woods for as good a reason as I went there. Perhaps it seemed to me that I had several more lives to live, and could not spare any more time for that one. It is remarkable how easily and insensibly we fall into a particular route, and make a beaten track for ourselves. I had not lived there a week before my feet wore a path from my door to the pond-side; and though it is five or six years since I trod it, it is still quite distinct. It is true, I fear, that others may have fallen into it, and so helped to keep it open. The surface of the earth is soft and impressible by the feet of men; and so with the paths which the mind travels. How worn and dusty, then, must be the highways of the world, how deep the ruts of tradition and conformity! I did not wish to take a cabin passage, but rather to go before the mast and on the deck of the world, for there I could best see the moonlight amid the mountains. I do not wish to go below now.

Thoreau’s experiment made me immediately think of the more permanent one (so far) of Simone Perotti, who left a promising career to dedicate himself to seafaring and art. His book Adesso basta [Enough of it – own translation] is definitely an angrier and irrevocable refusal of civilised modern society, but I feel that he and Thoreau had something in common when they realised that society (and career in particular) could not give everything they needed. You can follow Simone’s blog, regularly updated, and savour his terse and shiny Italian prose. I remember reading his book in a time where I was angry and disappointed myself, and it only made me angrier to hear relatives and friends that such a definitive refusal of society was not possible. I think I got to that point anyway, but slower and with unneeded waste of energies.

A more similar meditation parenthesis is the diary of Sylvain Tesson, Dans les forêts de Sibérie. The author settles for a few months in a small cabin on the shores of Lake Baikal, with even less human presence than Walden Pond, and a less forgiving climate. I enjoyed Sylvain’s reflections, blooming from unbroken hours of silence, of stillness. They look so similar to Thoreau’s , despite the 250 years and half of the world’s distance between them. I’ll make a more detailed review when I get back the book from my mum 🙂

These experiences made me think about how societal occupations changed in time (jobs, pastimes, duties), while the reflections of the mind, when it is given an appropriate amount of time off, converge in so many countries and ages. Is that the common ground of our humanity? I hope so, and even if there is no solid fact behind it, I like to see it as a fil rouge that is suitable to connect us all.